listen ) ) is the second-largest city in Portugal, the capital of the Porto District, and one of the Iberian Peninsula's major urban areas. Porto city proper, which is the entire municipality of Porto, is small compared to its metropolitan area, with an estimated population of just 231,962 people in a municipality with only 41.42 km 2. Porto's metropolitan area has around 1.7 million people (2021) in an area of 2,395 km 2 (925 sq mi), making it the second-largest urban area in Portugal. It is recognized as a global city with a Gamma + rating from the Globalization and World Cities Research Network.

Located along the Douro River estuary in northern Portugal, Porto is one of the oldest European centres, and its core was proclaimed a World Heritage Site by UNESCO in 1996, as "Historic Centre of Porto, Luiz I Bridge and Monastery of Serra do Pilar". The historic area is also a National Monument of Portugal. The western part of its urban area extends to the coastline of the Atlantic Ocean. Its settlement dates back many centuries, when it was an outpost of the Roman Empire. Its combined Celtic- Latin name, Portus Cale, has been referred to as the origin of the name Portugal, based on transliteration and oral evolution from Latin. In Portuguese, the name of the city includes a definite article: o Porto ("the port" or "the harbor"), which is where its English name "Oporto" comes from.

Port wine, one of Portugal's most famous exports, is named after Porto, since the metropolitan area, and in particular the cellars of Vila Nova de Gaia, were responsible for the packaging, transport, and export of fortified wine. In 2014 and 2017, Porto was elected The Best European Destination by the Best European Destinations Agency. Porto is on the Portuguese Way path of the Camino de Santiago.

Proto-Celtic and Celtic people were among the first known inhabitants of the area. Ruins of that period have been discovered in several areas. Archaeological findings reveal that there were also human settlements at the mouth of the Douro River as early as 8th century BC, which hints to a Phoenician trading settlement there.

During the Roman occupation of the Iberian Peninsula, the city developed as an important commercial port, primarily in the trade between Olissipona (the modern Lisbon) and Bracara Augusta (the modern Braga). Porto was also important during the Suebian and Visigothic times, and a centre for the expansion of Christianity during that period. 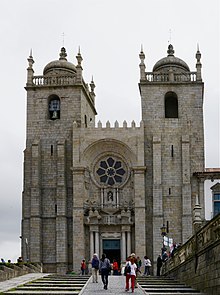 Porto Cathedral, Sé do Porto, built in the 12th century, with Baroque and 20th-century modifications

Porto fell under the control of the Moors during the invasion of the Iberian Peninsula in 711. In 868, Vímara Peres, an Asturian count from Gallaecia, and a vassal of the King of Asturias, Léon and Galicia, Alfonso III, was sent to reconquer and secure the lands back into Christian hands. This included the area from the Minho to the Douro River: the settlement of Portus Cale and the area that is known as Vila Nova de Gaia. Portus Cale, later referred to as Portucale, was the origin for the modern name of Portugal. In 868, Count Vímara Peres established the County of Portugal, or ( Portuguese: Condado de Portucale), usually known as Condado Portucalense after reconquering the region north of Douro.

In 1387, Porto was the site of the marriage of John I of Portugal and Philippa of Lancaster, daughter of John of Gaunt; this symbolized a long-standing military alliance between Portugal and England. The Portuguese-English alliance (see the Treaty of Windsor) is the world's oldest recorded military alliance.

Foz neighbourhood, along the coast

A street in Porto

In the 14th and 15th centuries, Porto's shipyards contributed to the development of Portuguese shipbuilding. Also from the port of Porto, in 1415, Prince Henry the Navigator (son of John I of Portugal) embarked on the conquest of the Moorish port of Ceuta, in northern Morocco. This expedition by the king and his fleet, which included Prince Henry, was followed by navigation and exploration along the western coast of Africa, initiating the Portuguese Age of Discovery. The nickname given to the people of Porto began in those days; Portuenses are to this day, colloquially, referred to as tripeiros (English: tripe peoples), referring to this period of history, when higher-quality cuts of meat were shipped from Porto with their sailors, while off-cuts and by-products, such as tripe, were left behind for the citizens of Porto; tripe remains a culturally important dish in modern-day Porto.

By the 13th century, the wine produced in the Douro valley was already transported to Porto in barcos rabelos (flat sailing vessels). In 1703, the Methuen Treaty established the trade relations between Portugal and England. In 1717, the first English trading post was established in Porto. The production of port wine then gradually passed into the hands of a few English firms. To counter this dominance, Prime Minister Marquis of Pombal established a Portuguese firm receiving the monopoly of the wines from the Douro valley. He demarcated the region for the production of port, to ensure the wine's quality; this was the first attempt to control wine quality and production in Europe. The small winegrowers revolted against his strict policies on Shrove Tuesday, burning down the buildings of this firm. The revolt was called Revolta dos Borrachos (revolt of the drunkards).

Between 1732 and 1763, Italian architect Nicolau Nasoni designed a baroque church with a tower that became its architectural and visual icon: the Torre dos Clérigos (English: Clerics' Tower). During the 18th and 19th centuries, the city became an important industrial centre and its size and population increased.

The invasion of the Napoleonic troops in Portugal under Marshal Soult brought war to the city of Porto. On 29 March 1809, as the population fled from the advancing French troops and tried to cross the river Douro over the Ponte das Barcas (a pontoon bridge), the bridge collapsed under the weight. This event is still remembered by a plate at the Ponte D. Luis I. The French army was rooted out of Porto by Arthur Wellesley, 1st Duke of Wellington, when his Anglo-Portuguese Army crossed the Douro River from the Mosteiro da Serra do Pilar (a former convent) in a brilliant daylight coup de main , using wine barges to transport the troops, outflanking the French Army.

On 24 August 1820, a liberal revolution occurred, quickly spreading without resistance to the rest of the country. It began with a military insurrection in the city of Porto. In 1822, a liberal constitution was accepted, partly through the efforts of the liberal assembly of Porto (Junta do Porto). When Miguel I of Portugal took the Portuguese throne in 1828, he rejected this constitution and reigned as an antiliberal, absolutist monarch. A Civil War was then fought from 1828 to 1834 between those supporting Constitutionalism, and those opposed to this change, keen on near-absolutism and led by D. Miguel. Porto rebelled again and had to undergo a siege of eighteen months between 1832 and 1833 by the absolutist army. Porto is also called "Cidade Invicta" (English: Unvanquished City) after successfully resisting the Miguelist siege. After the abdication of King Miguel, the liberal constitution was re-established.

Known as the city of bridges, Porto built its first permanent bridge, the Ponte das Barcas (a pontoon bridge), in 1806. Three years later, it collapsed under the weight of thousands of fugitives from the French invasions during the Peninsular War, causing thousands of deaths. It was replaced by the Ponte D. Maria II, popularised under the name Ponte Pênsil ( suspended bridge) and built between 1841 and 1843; only its supporting pylons have remained. The Ponte D. Maria , a railway bridge, was inaugurated on 4 November of that same year; it was considered a feat of wrought iron engineering and was designed by Gustave Eiffel, notable for his Parisian tower. The later Ponte Dom Luís I replaced the aforementioned Ponte Pênsil. This last bridge was made by Teophile Seyrig, a former partner of Eiffel. Seyrig won a governmental competition that took place in 1879. Building began in 1881 and the bridge was opened to the public on 31 October 1886.

A higher-learning institution in nautical sciences (Aula de Náutica, 1762) and a stock exchange (Bolsa do Porto, 1834 - 1910) were established in the city, but were discontinued later.

Unrest by Republicans led to the first revolt against the monarchy in Porto on 31 January 1891. This resulted ultimately in the overthrow of the monarchy and proclamation of the republic by the 5 October 1910 revolution.

On 19 January 1919, forces favourable to the restoration of the monarchy launched a counter-revolution in Porto known as Monarchy of the North. During this time, Porto was the capital of the restored kingdom, as the movement was contained to the north. The monarchy was deposed less than a month later and no other monarchist revolution in Portugal happened again.

In 1996, UNESCO recognised Porto's historic centre as a World Heritage Site. Among the architectural highlights of the city, Porto Cathedral is the oldest surviving structure, together with the small romanesque Church of Cedofeita, the gothic Igreja de São Francisco (Church of Saint Francis), the remnants of the city walls and a few 15th-century houses. The baroque style is well represented in the city in the elaborate gilt work interior decoration of the churches of St. Francis ( São Francisco) and St. Claire ( Santa Clara), the churches of Mercy ( Misericórdia) and of the Clerics ( Clérigos ), the Episcopal Palace of Porto, and others. The neoclassicism and romanticism of the 19th and 20th centuries also added interesting monuments to the landscape of the city, like the magnificent Stock Exchange Palace ( Palácio da Bolsa ), the Hospital of Saint Anthony, the Municipality, the buildings in the Liberdade Square and the Avenida dos Aliados, the tile-adorned São Bento railway station and the gardens of the Crystal Palace ( Palácio de Cristal). A guided visit to the Palácio da Bolsa, and in particular, the Arab Room is a major tourist attraction.

Many of the city's oldest houses are at risk of collapsing. The population in Porto municipality dropped by nearly 100,000 since the 1980s, but the number of permanent residents in the outskirts and satellite towns has grown strongly. 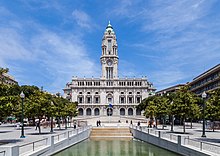 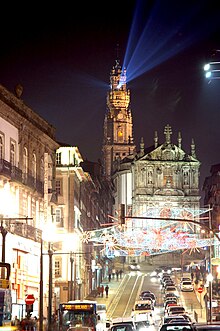 Administratively, the municipality is divided into 7 civil parishes ( freguesias ):

Porto features a warm-summer Mediterranean climate ( Köppen: Csb), with influences of an oceanic climate ( Cfb) like the northern Galicia. As a result, its climate shares many characteristics with the warm, dry Mediterranean climates of southern Europe and the wet marine west coast climates of the North Atlantic, providing it warm, dry summers and mild, rainy winters. Cool and rainy days can, occasionally, interrupt the dry season. These occasional summer rainy periods may last a few days and are characterised by showers and cool temperatures around 20 °C (68 °F) in the afternoon. The annual precipitation is high and concentrated in the winter months, making Porto one of the wettest major cities of Europe and the wettest major city with a Mediterranean climate. However, long periods with warmer temperatures and sunny days are frequent even during the rainiest months.

Summers are typically sunny, with average temperatures between 16 and 26 °C (61 and 79 °F), but can rise to as high as 38 °C (100 °F) during occasional heat waves. During such heatwaves, the humidity remains quite low. Nearby beaches are often windy and usually cooler than the urban areas. Summer average temperatures are a few degrees cooler than those expected in more continentally Mediterranean-influenced Portuguese cities because of the oceanic influence.

Winter temperatures typically range between 6 °C (43 °F) early in the morning and 15 °C (59 °F) in the afternoon, but rarely drop below 0 °C (32 °F) at night. The weather is often rainy for long stretches, although prolonged sunny periods do occur.


Parts of this text were copied from

How to reach Porto and the Conference Venue 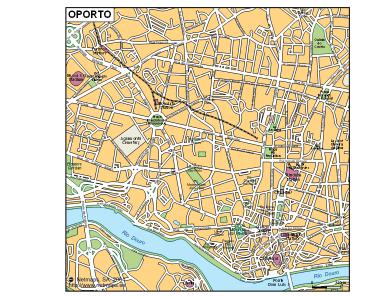 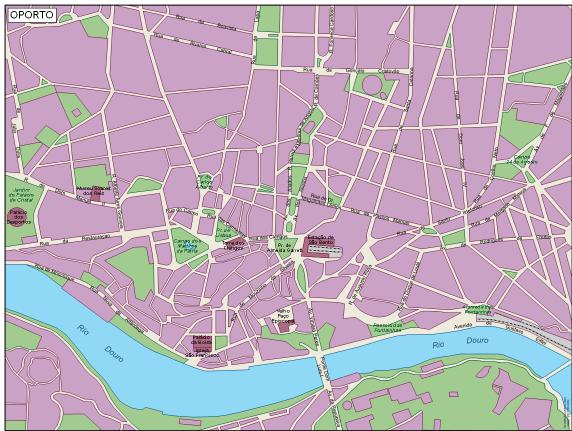