The Toulouse Metro area, with 1,312,304 inhabitants as of 2014, is France's fourth-largest metropolitan area, after Paris, Lyon and Marseille, and ahead of Lille and Bordeaux.

Toulouse is the centre of the European aerospace industry, with the headquarters of Airbus (formerly EADS), the SPOT satellite system, ATR and the Aerospace Valley. It also hosts the European headquarters of Intel and CNES's Toulouse Space Centre (CST), the largest space centre in Europe. Thales Alenia Space, ATR, SAFRAN, Liebherr-Aerospace and Airbus Defence and Space also have a significant presence in Toulouse.

The University of Toulouse is one of the oldest in Europe (founded in 1229) and, with more than 103,000 students, it is the fourth-largest university campus in France, after the universities of Paris, Lyon and Lille.

The air route between Toulouse–Blagnac and Paris Orly is the busiest in Europe, transporting 2.4 million passengers in 2014. According to the rankings of L'Express and Challenges, Toulouse is the most dynamic French city.

Founded by the Romans, the city was the capital of the Visigothic Kingdom in the 5th century and the capital of the province of Languedoc in the Late Middle Ages and early modern period (provinces were abolished during the French Revolution), making it the unofficial capital of the cultural region of Occitania (Southern France). It is now the capital of the Occitanie region, the second largest region in Metropolitan France.

A city with unique architecture made of pinkish terracotta bricks, which earned it the nickname la Ville Rose ("the Pink City"), Toulouse counts two UNESCO World Heritage Sites, the Canal du Midi (designated in 1996 and shared with other cities), and the Basilica of St. Sernin, the largest remaining Romanesque building in Europe, designated in 1998 because of its significance to the Santiago de Compostela pilgrimage route. 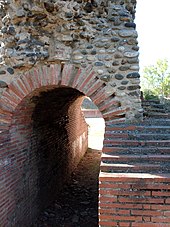 Vomitorium at the Roman amphitheatre in Toulouse

The Garonne Valley was a central point for trade between the Pyrenees, the Mediterranean and the Atlantic since at least the Iron Age. The historical name of the city, Tolosa (Τολῶσσα in Greek, and of its inhabitants, the Tolosates, first recorded in the 2nd century BC), it is of unknown meaning or origin, possibly from Aquitanian, or from Iberian, but has also been connected to the name of the Gaulish Volcae Tectosages.

Tolosa enters the historical period in the 2nd century BC, when it became a Roman military outpost. After the conquest of Gaul, it was developed as a Roman city of Gallia Narbonensis. In the 5th century, Tolosa fell to the Visigothic kingdom and became one of its major cities, in the early 6th century even serving as its capital, before it fell to the Franks under Clovis in 507 (Battle of Vouillé). From this time, Toulouse was the capital of Aquitaine within the Frankish realm.

In 721, Duke Odo of Aquitaine defeated an invading Umayyad Muslim army at the Battle of Toulouse. Many Arab chroniclers consider that Odo's victory was the real stop to Muslim expansion into Christian Europe, incursions of the following years being simple raids without real will of conquest (including the one that ended with Charles Martel's victory at the Battle of Tours, also called the Battle of Poitiers). 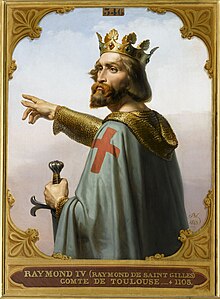 Raymond IV, Count of Toulouse was a leader of the First Crusade

The town became the capital of the County of Toulouse during the Carolingian era.

In 1096, Raymond IV, Count of Toulouse, left with his army at the call of the Pope to join the First Crusade, of which he was one of the main leaders.

At the beginning of the thirteenth century the county of Toulouse was taken in another crusade, of which it was the target this time. The reason for this was the development of Catharism in the south of France, which the Pope wanted to eradicate by all possible means. This struggle took on several aspects, going beyond the military crusade, such as the creation of an original and militant Gothic architecture: the Southern French Gothic.

In 1215 the Dominican Order was founded in Toulouse by Saint Dominic in the context of struggle against the Cathar heresy.

In the Treaty of Paris of 1229, Toulouse formally submitted to the crown of France. The county's sole heiress Joan was engaged to Alphonse, Count of Poitiers, a younger brother of Louis IX of France. The marriage became legal in 1241, but it remained childless so that after Joan's death the county fell to the crown of France by inheritance. Also in 1229, University of Toulouse was established after the Parisian model, intended as a means to dissolve the heretic movement.

Various monastic orders, like the congregation of the order of frères prêcheurs, were started. They found home in Les Jacobins. In parallel, a long period of inquisition began inside the Toulouse walls. The fear of repression forced the leading figures to exile, or to convert themselves. The inquisition lasted nearly 400 years, making Toulouse its capital.

Within the Kingdom of France

In 1271, Toulouse was incorporated into the kingdom of France and declared a "royal city". In 1323 the Consistori del Gay Saber was created in Toulouse to preserve the lyric art of the troubadours by organizing a poetry contest; and Toulouse became the centre of Occitan literary culture for the next hundred years. The Consistori del Gay Saber is considered to be the oldest literary society in Europe, at the origin of the most sophisticated treatise on grammar and rhetoric of the Middle Ages, and in 1694 it was transformed into the Royal Academy of the Floral Games (Académie des Jeux Floraux), still active today, by king Louis XIV.

The 14th century brought a pogrom against Toulouse's Jewish population by Crusaders in 1320, the Black Death in 1348, then the Hundred Years' War. Despite strong immigration, the population lost 10,000 inhabitants in 70 years. By 1405 Toulouse had only 19,000 people.

The situation improved in the 15th century. Charles VII established the second parliament of France after that of Paris. Reinforcing its place as an administrative center, the city grew richer, participating in the trade of Bordeaux wine with England, as well as cereals and textiles. A major source of income was the production and export of pastel, a blue dye made from woad. The fortune generated by this international trade was at the origin of several of Toulouse's superb Renaissance mansions.

The Capitole de Toulouse, Toulouse's city hall, is an example of the 18th-century architectural projects in the city.

Within the French Republic

The Battle of Toulouse (1814) was one of the final battles of the Napoleonic Wars, four days after Napoleon's surrender of the French Empire to the nations of the Sixth Coalition.

Toulouse has a temperate humid subtropical climate (Cfa in the Köppen climate classification) bordering on a true subtropical climate with 8 months of an average temperature above 10 degrees Celsius. Too much precipitation during the summer months prevents the city from being classified as a Mediterranean climate zone.

Toulouse has many interesting churches, but three of them are of remarkable architectural and historical interest.

Saint-Sernin Basilica, part of the Way of Saint James UNESCO World Heritage Site, is the largest remaining Romanesque church in Europe. With more than two hundred relics (including six apostles), most of them donated by Charlemagne to the sanctuary that preceded the present church, Saint-Sernin makes Toulouse the second city in Europe after Rome for the number of relics. The church was built at the end of the 11th century and at the beginning of the 12th century to welcome the crowds of pilgrims, its double-sided aisles and the ambulatory surrounding the apse make it the archetype of the great pilgrimage church, where pilgrims could make the circuit around the church and were able to stop for meditation and prayer at the apsidal chapels of the transept and the radiating chapels of the choir.

Cathedral of Saint Stephen is the seat of the Roman Catholic Archdiocese of Toulouse. Its construction, which was mainly done at the beginning and then at the end of the 13th century, reflects the history of this decisive century which saw the city lose its independence to become a French city. The single nave is the very first example of Southern French Gothic, at 19 metres wide it probably was at its completion the largest in Western Europe (1210-1220). The higher choir that adjoins it was built in the Gothic style of northern France shortly after the city became part of the Crown of France in 1271.

The convent of the Jacobins (late 13th century / early 14th century) is considered to be, together with the Albi Cathedral, the pinnacle of Southern French Gothic architecture. Like all Southern French Gothic churches it has a deliberately austere exterior, but it reveals the beauty of its architecture on the inside with an alignment of columns that are said to be the highest in Gothic architecture (28 metres high). The masterpiece of this church is the column that closes the choir (1292), its palm tree shape was a hundred years ahead of the flamboyant gothic fan vaults. Because he thought it was the most beautiful Dominican church in Europe, and perhaps also to compensate Toulouse, the birthplace of the Dominican order, for not having obtained the relics of Saint Dominic kept in Bologna, Pope Urban V made the church of the Jacobins the burial place of the Dominican friar Saint Thomas Aquinas, one of the most famous philosophers and theologians of the Middle Ages.

The Capitole de Toulouse (mainly 18th century), houses the Hôtel de Ville (city hall) and the Théâtre du Capitole (opera house). It is located on the Place du Capitole, a large 19th century square that has the size of a royal square (place royale). The large neo-classical facade of the 18th century (1750-1760) hides elements from various periods: the Henri IV courtyard of the early 17th century with a remarkable Renaissance portal; a 16th century tower, called «the keep» (le donjon), which housed the archives of the Capitouls; vast rooms and galleries with walls painted to the glory of the history of Toulouse (late 19th century)...

Toulouse has also preserved a rich civil architectural heritage from the medieval and Renaissance periods. Forty or so Gothic and Renaissance stair towers still dot the city, mostly hidden in inner courtyards. More than two hundred mansions (called hôtels particuliers) or remains of mansions give an account of the evolution of civil architecture since the 12th century. The most remarkable are those of the Renaissance, a period which constitutes a golden age for Toulouse. Among these are the Hôtel d'Assézat, the Hôtel de Bernuy, the Hôtel du Vieux-Raisin, the Hôtel de Bagis...

The banks of the Garonne river offer an interesting urban panorama of the city. Red brick dykes from the 18th century enclose the river which is subject to violent floods. The only bridge to have withstood the floods of the past is the Pont-Neuf, it took almost a century to build it as the project was so ambitious (1545-1632). Further downstream, the Bazacle is a ford across the Garonne river, in the 12th century the Bazacle Milling Company was the first recorded European joint-stock company. On the left bank of the river, historically a flood-prone bank, stand two former hospitals whose origins date back to the 12th century: the Hôtel-Dieu Saint-Jacques and the Hôpital de La Grave. This is how the plague victims and other sick people were kept away from the city by the river.

Built at the end of the 17th century, the Canal du Midi bypasses the city centre and has linked Toulouse to the Mediterranean Sea ever since. Its 240 kilometres were inscribed as a UNESCO World Heritage Site in 1996.

The Jardin des Plantes is a large park spanning several blocks, including the museum of Natural History, cafés, activities for children and a botanical garden (early 19th century).

The Cité de l'espace (Space City) is a theme park of space exploration.

Getting to Toulouse and LAAS-CNRS

You can download all respective maps from this link.